As regard to the house. . . .From the Australian Heritage Database:

Description
Blairgowrie House, 17-23 Scott Wynd, Blairgowrie, is a single storey villa with tower, built in the 1870s on an elevated site. The house is asymmetrically arranged with a gabled wing to each face. Construction is of random coursed limestone with a slate roof, timber verandah and rendered chimneys, eaves and string courses and window sills. The eaves brackets, gable and tower details are distinctive.

A rate book search reveals the first title holder in 1864 was the Honourable Robert Byrne, auctioneer and estate agent, who transferred the land to Charles Gavan Duffy, Irish nationalist and Victorian statesman, in 1868. Duffy was an important figure in the development of the area. In 1872, when Duffy was Premier of Victoria, he transferred the title to his friend, Hon. Michael O’Grady MLA, businessman and Roman Catholic community leader. It appears that Blairgowrie House was built soon after for O’Grady who also had a town house in Hawthorn.

From 1876, the Blair family became owners, although an auction notice in Argus (16/4/1887, p.2), refers to the late Dr John O’Grady. One possible explanation is that he was the occupier not the rated owner.

Dr John Blair is the rated owner of Blairgowrie House from 1876 until it passed to his widow, Mary Hunter Blair, on his death in 1886. There were many subsequent owners of the property until, in June 1961, it was sold to the National Trust of Australia (Victoria) for $40,000.
Blairgowrie House is a substantially intact single storey limestone villa on an elevated site, which permits all round views of its asymmetrical form and tower. Notable details include the timber brackets, finials and acroteria, slate roof, tessellated tiles to the verandah, and rendered sills and string courses.

Condition and Integrity
Blairgowrie House, 17-23 Scott Wynd Street, Blairgowrie, was restored in 1972 and is owned by the National Trust of Australia (Victoria). The interior has been modernised and the house is leased as a private residence.

Details of the Lots available in 1923 are on this map from the NHS collection: 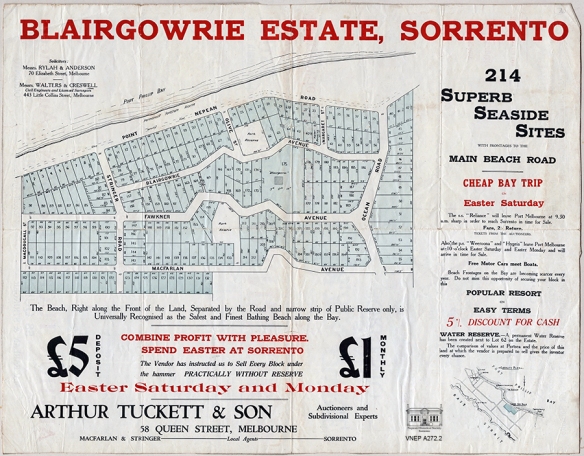