At the turn of the century the first significant upgrading of the station was undertaken – and the last by the Victorian government – in the form of the construction of a large disinfecting and bathing complex. Passengers as well as their goods and luggage were now subject to a form of disinfection.

No other quarantine facility in Australia appears to have undergone similar development, despite the threat of plague, which had reappeared in Hong Kong in 1894 and Bombay in 1896. Two factors which may have been responsible for this situation were that other colonial Governments were lax in their approach due to the impending Commonwealth control and responsibility for quarantine, and that Victoria was especially fortunate in that Dr D Astley Gresswell, head of the Department of Health, was vitally concerned with these issues. Historian Shane Power has written that the Victorian reaction to overseas developments and the threat of plague, as manifested in the new facilities, was probably due to Gresswell’s influence.63 In addition, and closer to home, it could also have been that the issues relating to the recent detention of the Himalaya (as outlined previously) may have expedited the construction of appropriate bathing and disinfecting facilities. 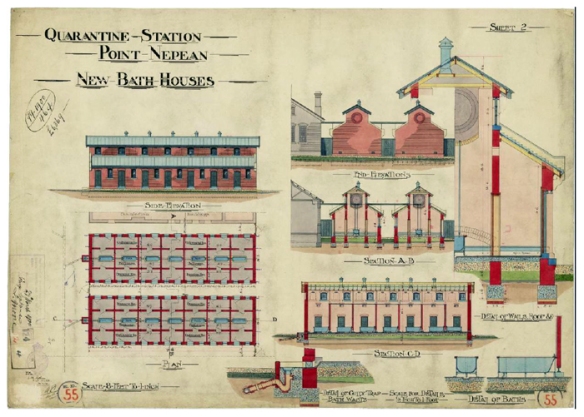 The disinfecting and bathing complex adopted a new palette of materials – that of red face brick – and its appearance seemed to signal a break with old methods and facilities of previous years.64 The complex consisted of a brick disinfecting building – including the boiler, two brick bathing blocks and a timber luggage receiving store.

The new buildings augmented the 1866 stone wash-house and replaced the former drying house and boiler. Subjects entered the bathhouse building through one door, discarded their clothes which were removed for disinfection and washing, bathed and then exited through another door, after putting on clean garments, which had been left waiting in the dressing room for this purpose. In 1908/09, a timber kitchen building was appended to Hospital No. 2 as part of its upgrade to form improved accommodation for second class passengers. This kitchen building, one of the last works documented and funded by the Victorian government, would be a short-lived facility – it was superseded by 1916.65

Putting the station to other uses #2

Despite the transfer of authority to the Federal government, the Victorian government was still allowed to make other use of the buildings (which during the late 1900s were again apparently underutilised), and in both 1909 and 1910 accommodated one of its summer schools for teachers, conducted by the Education Department:

No fewer than two hundred and fifty of the state school teachers of Victoria formed one of the summer schools which has become a pleasant progressive part of our educational system…. The school this year was held in the quarantine grounds of Point Nepean, where splendid airy dormitories lie through the year happily unused; where there are fine buildings for lecture-halls – everything that student or tourist can desire. The spot is in all senses ideal, and the director of Education was fortunate in thinking of it. One hundred of the students at the summer school were lady teachers, and the pier was the divisional point between the men’s and women’s quarters. This was another advantage in the quarantine ground as the site for a summer school. The different dormitories could be set apart for the sexes, and complete privacy ensured.66

Photographs which accompanied reports of the success of the summer school in The Weekly Times and The Australasian provide evidence of the form of the station during these years – prior to the ambitious programme of building works which would soon ensue.

The photographs above and below also show that there were timber picket fences between Hospital Nos 3 and 4 as well as a solid timber picket fence effectively dividing the station into two halves. The fence is believed to have existed prior to this temporary use, and, while its use cannot be definitively understood, it may have been used earlier to segregate the social classes and put to use to separate the sexes during the summer schools. 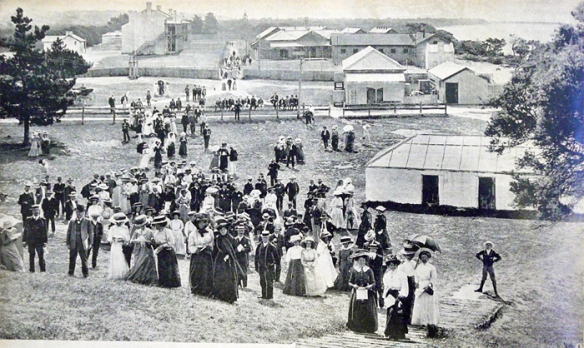 The summer school was deemed a success and repeated the following year. In April 1910, several weeks after the last of the school attendees had departed for their classrooms, the Otway was detained at the Quarantine Station due to an outbreak of smallpox (See Otway story HERE). An article published in The Weekly Times provided an account of the detention, and as shown earlier, relatives and friends again made an amusing sight, calling across the fences at the police enclosure at the entrance to the station (See below). 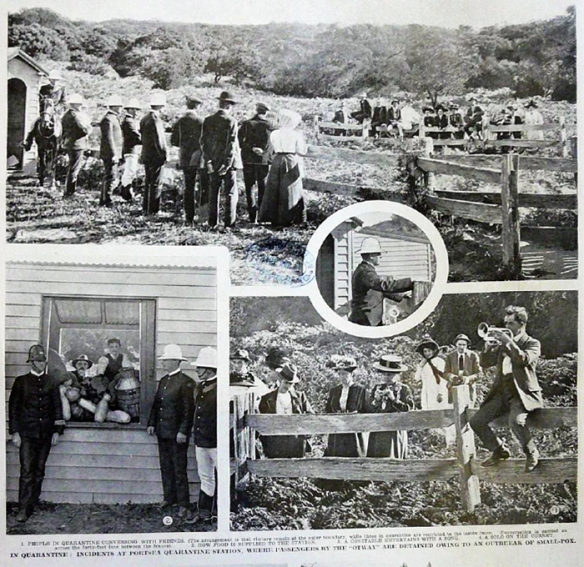 Despite the proclamation of the Commonwealth in May 1901, the implementation of quarantine procedures and the administration of the Point Nepean station, as shown above, remained under the control of the Victorian Government for several years. The land however, had been promptly transferred to the Commonwealth, taking effect on 1 March 1901. The transfer was from the Crown in right of the State of Victoria in consideration for payment by the Commonwealth of the sum of £69,909.67

In 1909 the Commonwealth Quarantine Act was proclaimed and with the assumption of responsibility came an ambitious programme of upgrading of facilities over the next decade, building on those of the Victorian government, particularly in the early years of the new century. These were made in accordance with the recommendations of Dr W Perrin Norris, the first Commonwealth Director of Quarantine. Dr Norris had previously been the Chief Medical Officer for Victoria, having assumed the position from Dr Gresswell.

After the Commonwealth assumed control of the site, the disinfecting and bathing group of buildings was increased with the addition of a clean luggage store, waiting room and an additional shower block. The clean luggage store was also later extended, and an extensive tramway system installed – SEEN HERE, at top right – and a second disinfecting chamber installed.

During this period several of the station’s earliest structures, including those which were preexisting, were demolished. These included Patrick Sullivan’s original cottage, (which featured prominently in the photos above), the stone store and wooden hospital, by this date utilised as a bedding store, and the storekeeper’s quarters.

A November 1915 sewerage plan for the site (held in the National Archives of Australia) indicates the position of the new dining room and kitchen wing, centrally located between Hospital Nos 1 and 2. 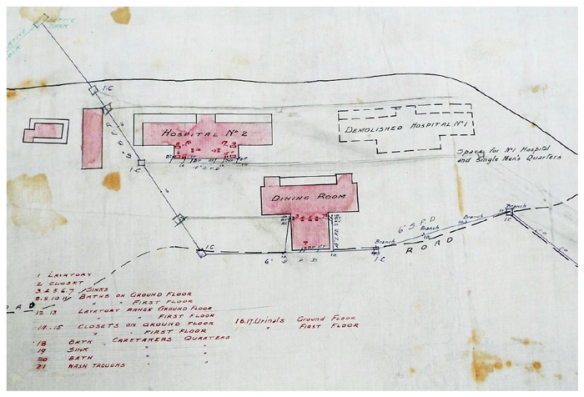 The plan also shows that the bedding store was still extant at this date. Most interestingly, it shows the outline of Hospital No.1, annotated ‘Demolished Hospital no.1’.

A site plan of Hospital No.1 dated 9 February 1916 is annotated ‘Proposed No. 1 Hospital’ (Below). This depicts the intended site of the new building, with the drawing annotated ‘Leave 20’ [feet] between cliff and corner’. 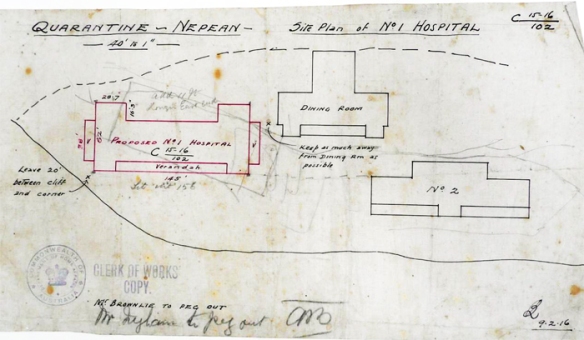 A later pencil outline suggests that this was not practicable, and the alignment of the hospital was therefore skewed considerably and built much closer to the dining room wing than originally planned. The design of the new dining room adopted a simple pavilion form which would also be utilized in the design of a new administration complex, which replaced the former storekeeper’s quarters in 1916, possibly enclosing the original structure within its walls.68

A new timber isolation ward and associated administration building was also added to Hospital No. 5, and a timber dining room and kitchen building, of more modest scale than that built behind the hospital buildings on the hill, was constructed to service Hospital Nos 3 and 4. The Station was generally ‘completed’ by the mid-1920s to its present form, save for the later Army buildings.

Originating during the final months of the First World War, and spreading rapidly through military personnel already weakened by the strain of combat, the Spanish ‘flu spread with rapidity. The first cases were detected at Fort Riley, Kansas in the United States, and subsequently in Queens, New York. The epidemic then came on in three virulent waves, between March 1918 and June 1920. Its reach was virtually global, spreading even to Pacific islands and the Arctic. It is estimated that more than 60 million people died from the disease. In Australia, more than 12,000 deaths occurred.

Returning servicemen were considered to be particularly at risk and at the Quarantine Station twelve timber emergency huts, each accommodating 32 people, were erected in 1919. The working drawing was drafted in March 1919, and the contract signed on 15 April. The contract details (Below) are annotated:

‘The whole of the works to be completed and delivered within five weeks from date…The delivery of 1st hut to be made within ten working days from date.’

This underscored the urgency of the situation. 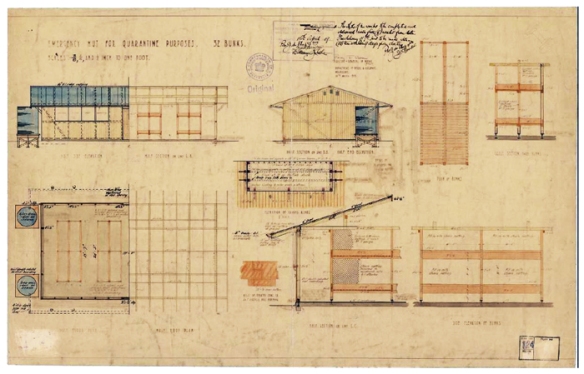 This aerial photograph of c.1922 shows the isolated location of the huts in relation to the other station buildings (Bottom left), including from the Isolation Hospital itself. 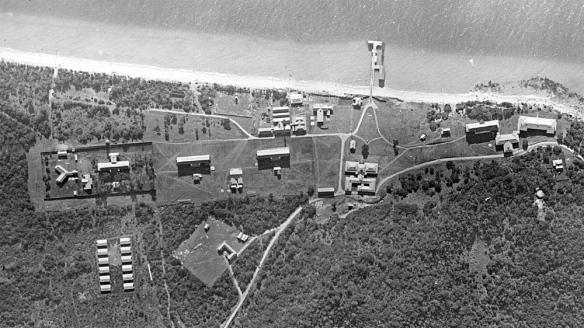