After a protracted voyage due to experiencing contrary winds, the Hurricane arrived off Port Phillip Heads on 21 April, and took on board Pilot Kennedy. However, owing to unfavourable winds the vessel did not attempt to enter Port Phillip until daylight the next day. As the Hurricane entered the Heads when abreast of Point Lonsdale, the vessel’s hull was felt to touch the bottom, but due to the slight nature of the bump nothing more was thought of the incident, other than to have the carpenter sound the pumps, which indicated no water had entered. The vessel hove to off Queenscliff to be cleared by the health officer, which was duly completed and then resumed its voyage up the South Channel. Whilst proceeding up the channel it was reported that the fore compartment was being filled by water coming through the hawse holes; a not uncommon occurrence for the vessel. However, as the Hurricane began to dip by the head, the pilot decided to shape a course into Capel Sound, where the vessel could be anchored and then pumped dry, but time would not allow this to happen. For when rounding up to anchor the vessel sank by the head, allowing just enough time for all of the passengers and crew to escape into the rigging or the boats. 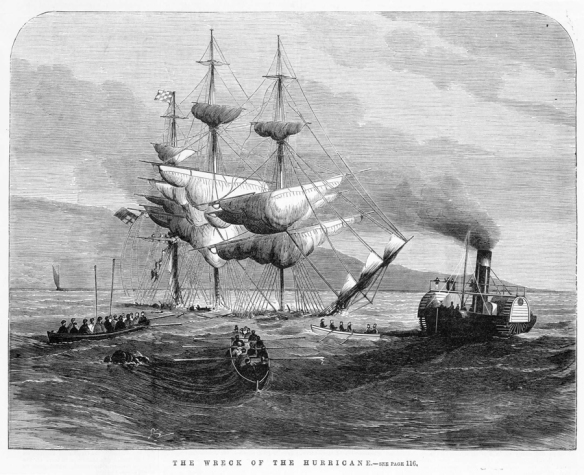 The plight of the Hurricane was observed from Queenscliff and the tug Titan anchored there, was immediately despatched to render assistance. The Titan arrived shortly after the vessel sank and took off all the passengers and crew and proceeded up the bay to Melbourne. So quick was the foundering of the vessel that all on board lost everything, only saving what they stood up in.
Within days, tenders were called to remove all the cargo and fittings from the wreck and J. Nicol and Co. were the successful tender’s with a bid to remove the cargo at one pound eighteen shillings a ton. Work began immediately, with divers successfully removing most of the cargo except for the slate, some iron and lumber.

At the subsequent Court of Inquiry, it was found that no one event could be attributed to causing the vessel to founder, as reported in the Age of the 1 May 1869:

It has been impossible to account for the cause of the sinking of the Hurricane, all the evidence adduced going to exonerate the pilot from having struck on the Lonsdale
Rock and there is not sufficient evidence to show that the ingress of water through the hawse pipes was sufficient to cause her to go down in the manner she did.

The Hurricane lay on the bottom of Port Phillip until rediscovered by divers in March of 1971, badly damaged and breaking up due to the ravages of time and explosives used by salvagers.

from: ‘Shipwrecks around Port Phillip Heads’ by Don Love