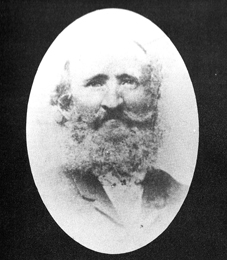 It is generally believed that Portsea was named by James Sandle Ford: Portsea, now part of Portsmouth, England, was possibly one of the last views he had of his native land. When he took up his lease he had recently arrived from Van Diemens Land where he had been transported for 7 years after being convicted of machine breaking in 1830.

Eager to make a new life after his pardon in 1836, he made his way to Port Phillip, and by1844 he had applied for, and acquired, the license for a pastoral run at Point Nepean, described in an earlier visual survey as being bounded on the north by the bay and on the south by the straits” On the west was the run of Denis Sullivan on Point Nepean and on the east that of William Devine.

Ford was able to make his first purchase of part of his lease in 1860: by that time he was well established in limeburning, and was also engaged in dairying, cultivating paddocks and raising stock – he was a well known breeder and judge of horses. In 1850 he had built the first section of his house on a site overlooking the lagoon which had for many centuries attracted the Boon Wurrung. Sections of this old limestone construction still remain. By this time he was in a position to supply visiting ships and the newly established Quarantine Station with fresh meat and other produce.

By the early 1860s he had built the original Portsea pier which gave sufficient draft to vessels such as the limecraft to ship his lime and produce to Melbourne. This gave Portsea the early advantage in this regard over nearby Sorrento. During these and later years Ford provided employment for a growing population in his kilns and other ventures, which included a small building which he soon converted to a hotel. As the area began to attract tourists he saw the need to develop it, and in 1872 converted it to a large residential establishment known as the Nepean Hotel. This was run by Fords family and descendants almost continually for a hundred years until it was demolished in 1971.

THE COPPIN ERA
In the early 1860’s Sir Charles Gavan Duffy took up land at Sorrento, and in time other professional men built their seaside residences here. However, when the Hon. George Selth Coppin, with his ability to quickly grasp the possibilities of the unique marine attractions and historical associations of the Peninsula, used his talents for organization and promotion, together with his power to inject his own enthusiasm into others, a rapid transition from a fishing and erstwhile lime burning village to a bustling seaside resort took place. In 1870 he chartered a paddle steamer to bring a party of city business men to Sorrento in order to demonstrate to them the potentialities for development. Point King became a featured spot again, as the paddle steamer carrying them ran aground there, the party being landed in rowing boats. They were then transported by horse cabs, previously arranged for by Coppin, over a rough bush track to the Back Beach and were introduced to the Ocean Amphitheatre, so named by him. He gained their support, resulting in the flotation of the Ocean Amphitheatre Co, which bought a strip of land, erected several, cottages and later built the Continental Hotel and other houses. It is of interest to note that a cottage with four rooms, kitchen, laundry and servants’ quarters, could be purchased on terms of 6 per cent for an outlay of £600. In 1871, a Government Census showed that Sorrento, including Portsea, had 22 occupied houses with 98 inhabitants and Rye had 14 occupied houses with 69 inhabitants.
DEVELOPMENTS – THE ROTUNDA
In order to develop the Ocean Amphitheatre a road was cut through the high cliffs and a large rotunda was built at the Back Beach. This Rotunda, lined with life sized pictures of Royalty when it was first built, commanded a magnificent view. It was visited by thousands of people who admired the glorious scenery spread before them, and became a favourite place for picnickers and a resting place for mothers while they watched their families at play in the well, laid out parks at the Ocean Amphitheatre. It is recorded that “in 1875 the Government Picnic was held there. The most enjoyable entertainment was substituted for the established ‘whitebait’ dinner, and enabled ladies to participate in the political Festival of the Kerferd Government, a naval event which will long be remembered with great satisfaction.” Though it became necessary to demolish this Rotunda, another was erected in its place in 1970, thus perpetuating the vision of George Coppin.
PIER, WALKS, BATHS
The Sorrento pier was built in 1870 and with the regular steamer service came more and more professional people who selected land for their seaside homes. To celebrate Queen Victoria’s Diamond Jubilee, Coppin, at his own expense, constructed cliff paths, benches and shelter sheds situated at all vantage points at Jubilee Point, Diamond Bay and Mount St. Paul. Today these paths, together with others constructed along the cliffs can be followed, but only a few stumps remain to indicate either the benches or shelters. He was also instrumental in having a strip of land some 500 yards wide, running from London Bridge almost to Cape Schanck, set aside as a natural reserve. In 1875 the company built the swimming baths which are described in an early brochure as “having a clean sandy bottom, strong briny water, transparent as crystal, secured by a fence to exclude large fish; convenient dressing rooms, and thorough cleanliness. A red flag denotes gentlemen’s hours; white flag for ladies. Single bath with towels, sixpence; tickets 4/- per dozen; monthly ticket 5/-.” The slopes rising from the beach in front of the baths had been the site for the first tent home of Capt. John Boswell Clark who arrived at The Heads in 1856. After spending some years as skipper of a schooner taking lime to Melbourne, he bought two acres of land on which stood an old cottage, by tradition, the first built entirely of stone in Sorrento (circa 1850). It was built along the lines of a Scottish crofter’s cottage. Beside it he later built the Mornington Hotel (1878) now called the Koonya. The cottage was demolished in 1953 to make’ room for the dining room of the Koonya. The Sorrento Park was developed on land given for the purpose by Sir Charles Gavan Duffy and at that time was described as “A government reserve planted with English trees. A bowling green and croquet lawn has been formed, beds and walks have been laid out with great taste, and the garden facing the Bay is a most charming promenade upon a summer’s evening and a delightful spot for picnic parties.”

Another project was the promotion of Sorrento, where he had a house, as a holiday resort, although he lost a lot of money in building a private tramway there in the late 1880s. After an illness at Sorrento in March 1906 he returned to Pine Grove, Richmond, where he died on the 14th, survived by his wife and their two sons and five daughters, and by two of the three daughters of his first marriage. He left an estate valued at £9709. 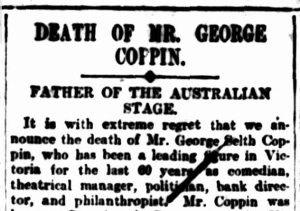 (Extract from ‘The Peninsula Story’ Published by NHS 1992)