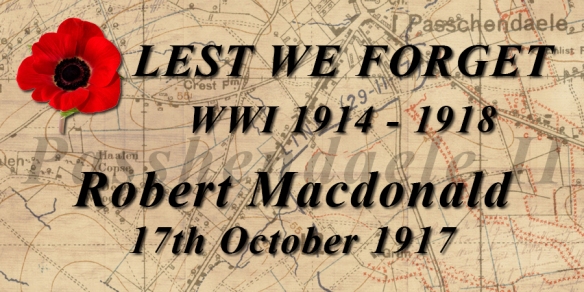 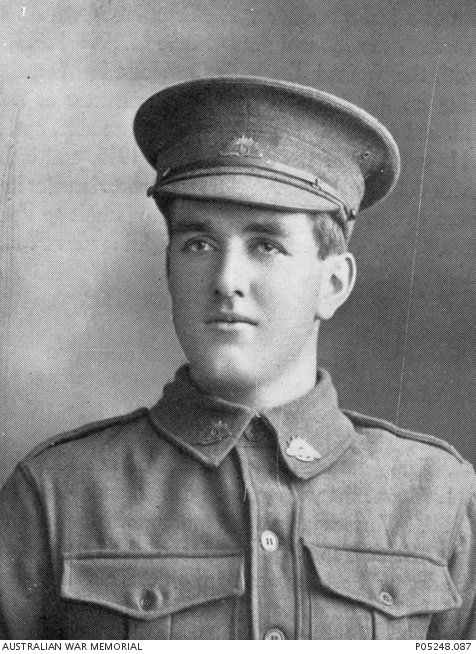 Robert “Bert” Macdonald was born on 30th June 1895 at Ballarat. He was the third son of Elizabeth and Robert Macdonald, an accountant in Ballarat. Bert’s eldest brother, Robert Ernest had died in infancy in 1893.

Bert went on to become a teacher and 1916 found him at Sorrento School No.1090 along with another Sorrento teacher Francis Stephens formerly from Pt. Lonsdale who would enlist on 24th April of 1916.

Bert enlisted on 15th August 1916 into the 29th Infantry Battalion, 10th Reinforcements. On the same day William Russell, son of Alexander and Margaret (nee Watson) of Sorrento would also enlist. Margaret would later make enquiries of the army regarding the wellbeing of both Bert and Francis Stephens.

The 29th Infantry Battalion, 10th Reinforcements embarked from Melbourne on H.M.A.T. A16 “Port Melbourne” on the 21st October 1916.

On 22nd May 1917 Robert was transferred to 8th Training Battalion in France from where he was finally transferred on 11th June 1917 to the 46th Australian Infantry Battalion.

The 46th Battalion was raised in Egypt on 24 February 1916 as part of the “doubling” of the AIF. Approximately half of its new recruits were Gallipoli veterans from the 14th Battalion, and the other half, fresh reinforcements from Australia. Reflecting the composition of the 14th, the new battalion was composed mostly of men from Victoria, although some of the reinforcements hailed from New South Wales and Western Australia.

As part of the 12th Brigade of the 4th Australian Division, the 46th Battalion arrived in France on 8 June 1916, destined for the Western Front. It participated in its first major battle at Pozieres. Initially, the battalion provided carrying parties for supplies and ammunition during the 2nd Division’s attack on 4 August, and then, with its own division, defended the ground that had been captured. The 46th endured two stints in the heavily contested trenches of Pozieres, as well as a period in reserve.

After Pozieres, the battalion spent the period up until March 1917 alternating between duty in the trenches and training and rest behind the lines. On 11 April it took part in the attack mounted against the heavily defended village of Bullecourt – part of the formidable Hindenburg Line to which the Germans had retreated during February and March. Devoid of surprise, and dependent upon the support of unreliable tanks, the attack had little chance of success; after managing to fight through to it’s objectives, the 46th was forced to withdraw with heavy casualties. Later in the year, the focus of the AIF’s operations switched to the Ypres sector in Belgium where the 46th took part in the battles of Messines and Passchendaele.

Broodseinde was a large operation, involving twelve divisions attacking simultaneously along a 10 kilometre front. In the centre, I and II Anzac Corps, composed of three Australian divisions and the New Zealand Division, went forward side by side capturing the village of Broodseinde. The attack was executed in the same manner as Menin Road and Polygon Wood; The troops’ objectives were only one or two kilometres from the start line and the advance was preceded by a massive artillery bombardment. The infantry then followed a creeping barrage, which was timed to arrive at the German trenches just before the infantry did. Once again concrete pillboxes, such as those captured by the Tasmanian 40th Battalion at Tyne Cot and still visible in the cemetery there, delayed, but did not stop the advance.

Map phase 1 (Initial Positions): The British and German front lines before the start of the Battles of Broodseinde and Passchendaele. The 1st and 2nd Australian Corps were ordered to attack on a front to the north of where the 1st Corps had fought during the battles of Menin Road and Polygon Wood. 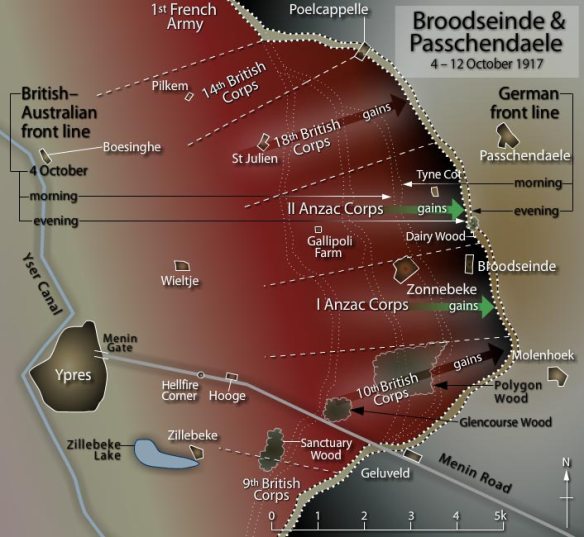 After Broodseinde the weather turned against the British. Rain and mud made movement on the battlefield extremely difficult. Artillery was unable to come forward so the barrage for the next two operations was weak and ineffective. The Australians attacked again, towards Passchendaele, on 9 and 12 October. Little ground was gained and the few men who reached the outskirts of Passchendaele were thrown back by German counterattacks. The exhausted and depleted Australians were relieved by the Canadian Corps, which took Passchendaele on 6 November, bringing a close to the Third Battle of Ypres. 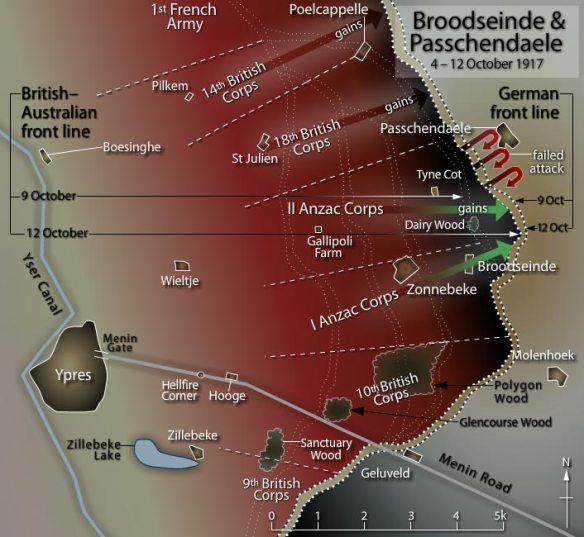 Map phase 3 (British advance 9–12 October): In a series of small piecemeal attacks less than a kilometre of ground was gained and the Australian attack on Passchendaele was repulsed.
This map is similar to the battle of Menin Road, showing the third of the three successful Australian advances. The city of Ypres is in the bottom left (south-west) corner of the map, with the Yser Canal running north-south on its western edge. Six kilometres east of Ypres is Polygon Wood, and in the top right hand corner of the map is the village of Passchendaele, ten kilometres from Ypres. The extent of the advance eastwards is shown. Between Polygon Wood and Passchendaele, a distance of five kilometres, were Tyne Cot, where the cemetery now stands, and the village of Broodseinde.

The 46th Battalion were, along with 47th and 48th Battalion part of the 12th Brigade of the 4th Division which in turn was part of I ANZAC Corps.

The 12th Brigade was tasked with protecting the right flank of II ANZAC Corps, the southern most unit of which was the 3rd Division commanded by John Monash.

Contrary to the simplified map above, the boundary between 3rd and 4th Division (Therefor ANZAC I & II) was the railway line just south of Tyne Cot (on the map). See below for a better idea of their situation.++

“The 9th Brigade had taken its second objective and the 10th Brigade its first, but the position of the officers in charge of these advanced lines was full of anxiety. On the eastern slope Captain Carr (35th Bn.), the senior officer in this part of the 9th Brigade’s front, could see the 4th Division (12th Brigade) somewhat ahead of his right, and by 10.55 he had discovered that the 36th was on his left, but farther left the 10th Brigade was far behind on the first objective. The German guns ahead were sniping with dreadful accuracy. Carr, like Giblin on the western slope, sent back for instructions: “What am I to do?”

By 3:30pm . . . After counterattack and enfilade fire from their left

“The 3rd Division was thus back almost to its starting point.

“On the right, Germans at “Assyria,” after shooting for some time from the windows, fled, and in spite of very severe casualties the 12th Brigade secured the first objective.

In the afternoon German troops were observed moving up all roads visible to the south-east. The enemy artillery opened a bombardment extending deep behind the Australian front, and at 3 o’clock German infantry, in impressively well-ordered waves, came over the rise ahead of the 4th Division. The target was easy, and Australian riflemen and machine-gunners quickly broke up the attack. But Captain Whitington’s isolated post was outflanked. Four of his messengers had been shot after going fifty yards. He now sent back his men, and, having seen them go, was following, when he was wounded.
At 4 o’clock a stronger but less orderly counter-attack issued from the same front. The 4th Division’s posts fired the S.O.S. signal, but no barrage fell on the advancing enemy.Rifle ammunition, however, had been brought up by carrying parties of the 45th Battalion, and the posts had no intention of withdrawing, when there occurred the retirement of the 3rd Division from Passchendaele Ridge.

As it was out of the question for the 4th Division to remain alone on the Keiberg, its officers gave the order to fall back. The railway line was the only practicable route, and almost the whole of the division’s advanced line trooped back along it, the actual withdrawal being completed without great loss.

For more details on the day’s actions the 12th Brigade Unit Diary for the period is available on the AWM Site HERE .

“Much of the effect of the antecedent successes was thus thrown away on October 9th and 12th. Haig now recognised that the hope of obtaining great strategic results from this year’s campaign had  vanished. He considered whether to stop the offensive or to secure by slower stages a better foothold on the ridge, rest there for the winter, and strike again in the spring.

What happened to Robert Macdonald?

Whilst the 46th Battalion was relieved on the field on the evening of 13th October, the Headquarters remained until the night of the 14th/15th. It was then that Robert was likely found to be wounded as this was not reported until 16th October 1917. He died of his wounds the next day.

Robert is buried at Lijssenthoek Military Cemetery about 25kms west of Broodseinde. 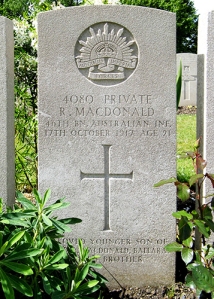 +++
The Macdonald family paid a terrible price in the war.