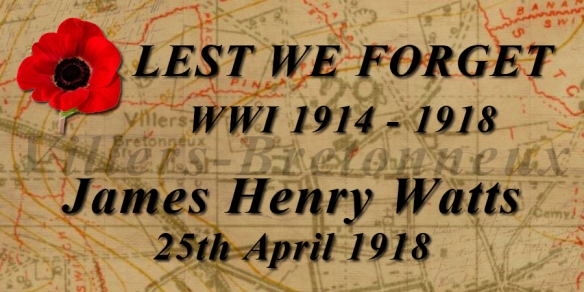 He was a loved member of a well known Sorrento family 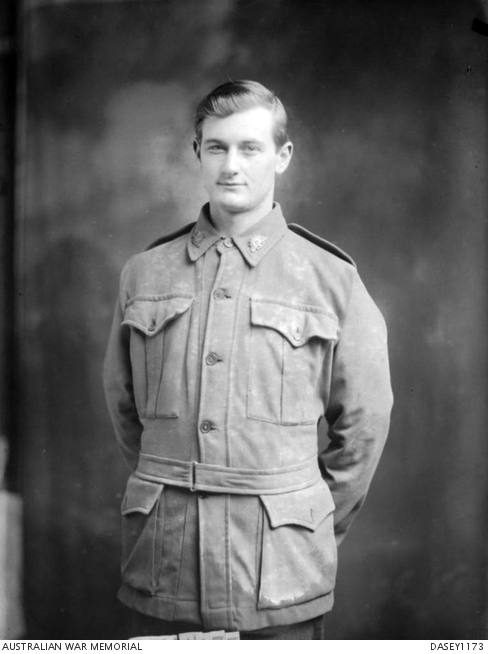 On the 13th of October 1894, Mrs Spunner attended to the birth of James Henry Watts to parents Elizabeth Emma (nee Pike) and Henry “Harry” Watts. James was Harry and Elizabeth’s fourth child, their third son, and would later become one of a family of seven boys and four girls.

Harry Watts and his family would be known to many as being associated with the building and running of the Sorrento Tramway from 1889 until 1921. Harry was also a significant figure in the community including the Football and Rifle Clubs.

James attended Sorrento State School with several of his siblings from 1901 until 1908. He would later be a barman at The Continental Hotel. Of Harry’s seven sons only Jim and his immediately older brother Ted would not work on the Tramway.

Three of the seven

Of Harry Watts’ seven sons, three would enlist in the First AIF. James Henry, his older brother Ted and younger brother George. Jim would be the first to enlist on July 15th 1915. Ted would enlist January 6th 1917 and George January 30th 1917.

At enlistment James was only 20 years of age so required parental consent.

(This was the same day and unit as Arthur Mackay Boxshall and Cecil Stanley Samuel Hibbert enlisted.)

Joining the three boys on the Ulysses was Alfred John Heath Dark from Sorrento who had enlisted two days after the others. Sadly, only one of the four would see our shores again.

HMAT A38 Ulysses from Flotilla Australia

But where did James end up? 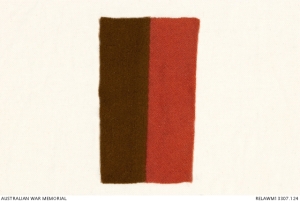 The 59th Battalion was raised in Egypt on 21 February 1916 as part of the expansion of the AIF. Approximately half of its recruits came from the veteran 7th Battalion, and the other half were fresh reinforcements from Australia. Reflecting the composition of the 7th, the 59th was predominantly composed of men from rural Victoria. The battalion became part of the 15th Brigade of the 5th Australian Division.

On 19 July 1916, the 59th became embroiled in its first major battle on the Western Front, less than a month after it arrived in France. The battle of Fromelles was a disaster for the 59th. Attacking in the first wave, the 59th suffered heavy casualties at the hands of German machine-gunners, and its advance faltered far short of its objective. Despite grievous losses, the units of the 5th Division manned the front line around Fromelles for a further two months.

The 59th spent the winter of 1916-17 rotating in and out of the front line. In March 1917 the battalion participated in the advance that followed the German retreat to the Hindenburg Line, but was spared having to assault it. It did, however, defend gains made during the second battle of Bullecourt. Later in the year, the AIF’s focus of operations switched to the Ypres sector in Belgium. The 59th’s major battle there was at Polygon Wood on 26 September.

With the collapse of Russia in October 1917, a major German offensive on the Western Front was expected in early 1918. This came in late March and the 5th Division moved to defend the sector around Corbie. During this defence, the 59th Battalion participated in the now legendary counter-attack at Villers-Bretonneux on 25 April.

As mentioned above, the 59th Battalion’s first major action was at Fromelles. James received a gunshot wound to the calf on the 19th of July. The first day of the battle. He was evacuated to England from Boulogne on the 24th of July where he spent two months in hospital.

After convalescing in England, James returned to the 59th in France on 6th Dec 1916. Returning to England in January 1917 with a hernia, James spent much of 1917 there with the short lived 65th Infantry Battalion (19 Mar 17 – 16 Sep17). During this time James was made Lance Corporal.

On 14th October James returned to France, rejoining the 59th Battalion on the 26th, shortly after the second battle of Passchendaele at the conclusion of the Third Battle of Ypres.

On the 29th of January 1918 James requested he return to the rank of Private.

On the 3rd of Feb 1918 the now Private James Watts was seconded to 15th Field Coy. Australian Engineers. The 15th Field Company was at the time responsible for maintenance of trenches and other infrastructure of the 15th Infantry Brigade around Wytschaete, just south of Ypres. They were ordered to Merris just over the border in France on March 24th whereupon James returned to the 59th Battalion.

The Move South – to Corbie, France

Over the last week of March 1918 the 15th Infantry Brigade, including the 59th Battalion moved to Combie, three miles north of Villers-Bretonneux.

As part of the German Spring Offensive on the Western Front German forces using infantry and tanks captured Villers-Bretonneux (near Amiens) from exhausted British defenders on 24 April 1918. The Australian 13th and 15th Brigades were brought forward and in a model of a well planned and co-ordinated night attack successfully recaptured the town. 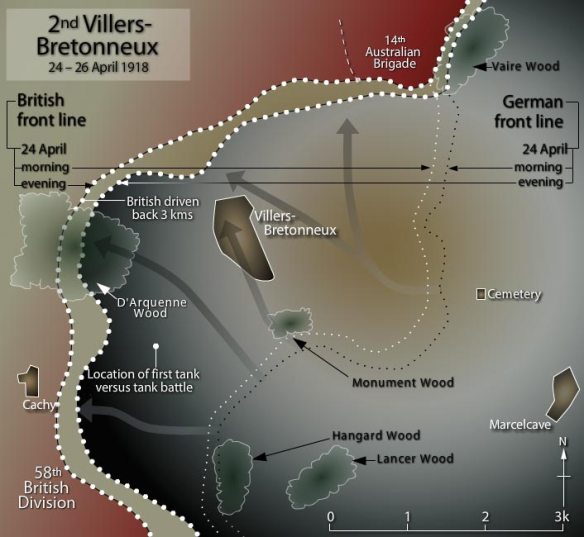 24 April Evening – By last light on 24 April the Germans had created a seven kilometre wide bulge in the British line and were well placed to attack northwards to hill 104.

“As soon as the news that Villers-Bretonneux was lost reached the higher headquarters, orders showered down for its immediate recapture.”

The Australian 13th and 15th Brigades were brought into the counter attack. With the 15th Brigade to attack from the North.

“At once, “in a calm, easy voice,” as one of his N.C.O’s records, Young gave the word to charge. There went up from the unleashed line a shout – a savage, eager yell of which every narrative speaks – and the Australians made straight for the enemy. From that instant there was no holding the attack. The bloodthirsty cry was caught up again and again along the line, and the whole force was off at the run.” 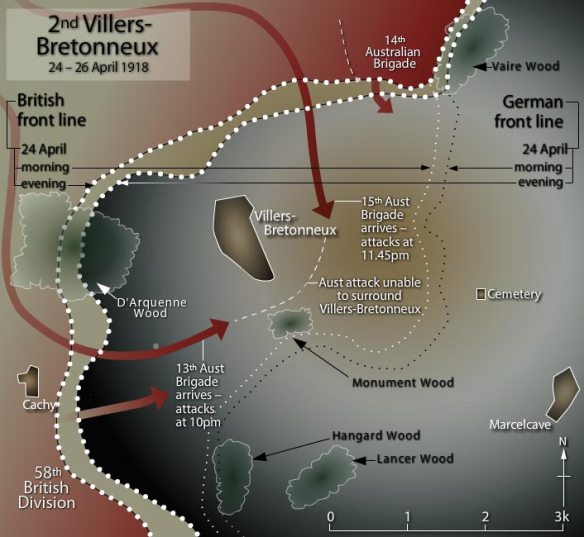 25 April Dawn – Two Australian brigades, with British support, counterattacked on the night of 24/25 April but did not quite succeed in surrounding Villers-Bretonneux by dawn. 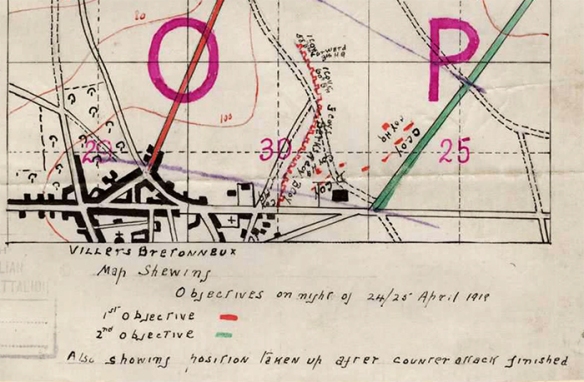 The attack met its objectives with the 59th Battalion suffering 22 fatalities and another 7 succumbing to wounds received.

We don’t know exactly what happened to James, but D Company, of which he was a member were at the forefront of the attack (see map above). His body was never recovered.

James is remembered at the Australian Memorial at Villers-Bretonneux 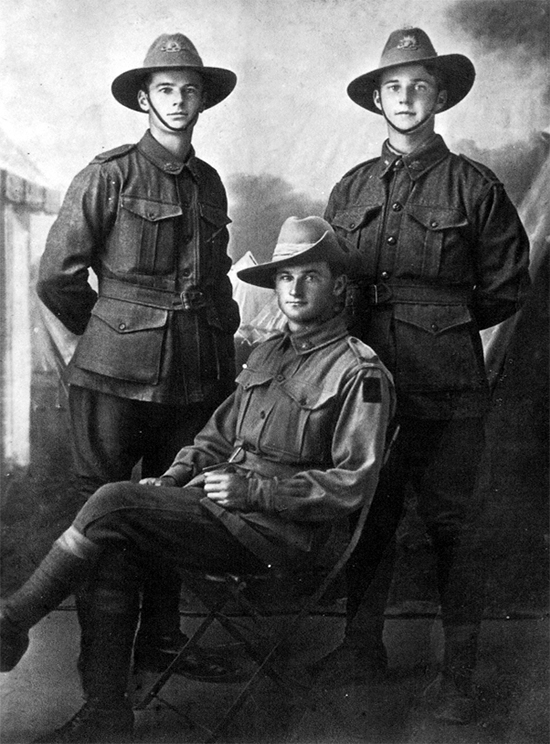 As mentioned above, two of James’s brothers, Edward John and George Norris Wyhburn Watts also took part in WWI. Both survived the war with George later becoming Treasurer of The Sorrento/Portsea RSL.