John Stafford was serving with the NSW Artillery at the time. John had come to NSW from Cavan, Ireland as a labourer in 1883. In 1896 he was in Newcastle and married Mary. He was listed as an Artilleryman and was presumably with the No.5 Battery NSW Artillery (Newcastle). The first two boys John Joseph and Albert Francis were born in Newcastle.

John and Mary would go on to have two girls whilst in Sydney – Gladys and Sylvia.

By the end of 1904 we find John and Mary in Portsea with their fourth son, Vincent William born there in 1906. Vincent was followed by another daughter in 1911, Catherine, who didn’t survive infancy. At the time John was on the electoral roll at the Barracks Queenscliff until 1908 but listed as ‘resident’ at Portsea. Presumably he was serving with the Royal Australian Garrison Artillery at Queenscliff and Point Nepean.

The two elder boys were enrolled at Sorrento State School in December of 1904 with George beginning there in January 1906. All the Stafford children left the school in 1912.

John remained on the Electoral Roll at Portsea until 1913 (despite presumably already having moved to Melbourne at the end of 1912) then appearing at Oakleigh in 1914. Sadly, John died on 27th November 1914 of post operative shock after a gallstone operation. His funeral was held at Victoria Barracks, with the cortege entraining to Springvale. (from Trove HERE)

When war broke out George’s older brother Albert Francis Stafford would, taking after his father, enlist in the 15th Field Artillery Brigade on 22nd May 1916. Later serving with the 11th F.A. Brigade in France. 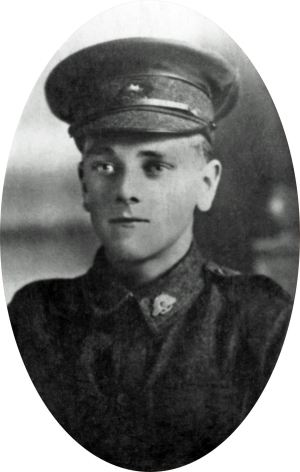 George had enlisted earlier on 7th March 1916 into the 37th Infantry Battalion.

But there was a slight problem . . . He was only 16!  Claiming to be 18 years and 2 months of age he was still required to obtain parental consent to enlist. This he provided:

There is some conjecture that this is forged. . . Compare it to a receipt signed by Mary some years later:

I’ll let you be the judge. 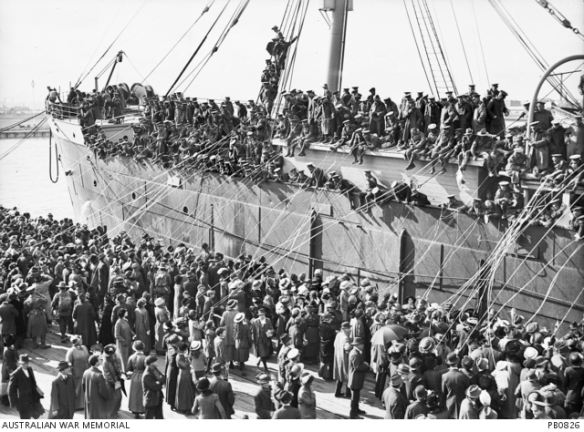 HMAT A34 Persic from AWM HERE

George spent a short while with 2nd Training Battalion then left for France on 16th September where he would join the 5th Infantry Battalion on 1st October 1916.

The 5th Battalion was among the first infantry units raised for the AIF during the First World War. Like the 6th, 7th and 8th Battalions it was recruited from Victoria and, together with these battalions, formed the 2nd Brigade.

The battalion was raised within a fortnight of the declaration of war in August 1914 and embarked just two months later. After a brief stop in Albany, Western Australia, the battalion proceeded to Egypt, arriving on 2 December. It later took part in the ANZAC landing on 25 April 1915, as part of the second wave. It was led by Lieutenant Colonel D. S. Wanliss, the officer who had raised the battalion. Ten days after the landing the 2nd Brigade was transferred from ANZAC to Cape Helles to help in the attack on the village of Krithia. The attack captured little ground but cost the brigade almost a third of its strength. The Victorian battalions forming the 2nd Brigade returned to ANZAC to help defend the beachhead, and in August the 2nd Brigade fought at the battle of Lone Pine. The battalion served at ANZAC until the evacuation in December.

After the withdrawal from Gallipoli, the battalion returned to Egypt and, in March 1916, sailed for France and the Western Front. From then until 1918 the battalion was heavily involved in operations against the German Army. The battalion’s first major action in France was at Pozieres in the Somme valley in July 1916. After Pozieres the battalion fought at Ypres in Flanders then returning to the Somme for winter.

In 1917, the battalion participated in the operations that followed-up the German withdrawal to the Hindenburg Line, and then returned to Belgium to join the great offensive launched to the east of Ypres. In March and April 1918, the battalion helped to stop the German spring offensive.

It subsequently participated in the great Allied offensive launched near Amiens on 8 August 1918. The advance by British and empire troops was the greatest success in a single day on the Western Front, one that German General Erich Ludendorff described as “the black day of the German Army in this war”.

The battalion continued operations until late September 1918. At 11 am on 11 November 1918, the guns fell silent. The November armistice was followed by the peace treaty of Versailles signed on 28 June 1919.

Having joined the 5th Battalion on 1st October 1916 George developed ‘Trench Fever’ and was evacuated on 15th December. He returned to England on 23rd December.

George would remain in England until 15 July 1918 whereupon he embarked for France and rejoined the 5th Battalion at Meaulte (just North of the Somme) on 23 July 1918.

After the battle of Hamel the British felt that Amiens was secure, and they began planning for an offensive of their own. On 8 August this became the battle sometimes called the Battle of Amiens. The idea was for General Sir Henry Rawlinson’s Fourth Army, which included the Australian Corps, to attack on a 20-kilometre front; the French First Army would carry the line on the south. For this enterprise the battle-hardened Canadian Corps was secretly brought down from Arras to take part, and the 1st Australian Division (which included the 5th Infantry Battalion) came from Flanders to rejoin the four Australian divisions already on the Somme.

The Battle of Amiens was the crucial Allied breakthrough counter-offensive, launched on the Western Front around Amiens, in the Somme sector. An “all arms battle”, the Allies made effective use of infantry, artillery tanks and aircraft, which led to an unprecedented advance (about 12 kilometres by early afternoon of the first day) and vast numbers of German prisoners.

from The Battle of Amiens at AWM HERE

Setting out from the positions of Villers-Bretonneux and Hamel, the Australian troops in two hours had accomplished all their objectives, and the Canadian troops that had begun the attack alongside them had advanced several kilometres. In just over 3 hours, the enemy’s front line had been overrun. In total, the Allied forces captured 29,144 prisoners, 338 guns, and liberated 116 towns and villages. Ludendorff called 8 August “the black day of the German army”.

The importance of this offensive in tactical terms was that it was much like Hamel in that it provided a further example of the effectiveness of shifting from stagnant trench warfare to mobile multi-faceted warfare. Not surprisingly, it was said that the Australian troops much preferred and felt they were better suited to this more mobile, above-ground form of fighting.

Despite the achievements made in this campaign, in the following days it proved a struggle to consolidate this success. From 9 – 11 August, although the Allies continued to advance with Australians maintaining the lead, there were heavier losses for fewer gains in ground, there were fewer tanks to use as protection, and German forces regrouped and began to advance into other areas. Even then, it was expected by many of the Allied commanders that war would push on into 1919.

After the success of the 8th of August the Australian First Division replaced the Fifth Division on the 9th, just South West of Harbonnières.

The task of the Australian Corps depended on the action of its neighbours. On the right it would this day swing up the southern half of its line to Lihons, a ruined village on the far side of the one considerable hill within reach, whose rounded summit rose four miles south-east of Harbonnières.

. . . The first stage of the attack planned for the 1st Division had thus been almost completed by the 15th Brigade, and the 8th Brigade (both 5th Division) had done more than its part on the left, when the 1st Division arrived. . .

The 2nd Brigade (including 5th Battalion) had been marching all the morning, with the 3rd a couple of hours behind it. The general dispositions of the 2nd had been settled by General Heane and his battalion commanders the previous morning at Camon. The 8th Battalion on right, 7th on left, 6th and 5th respectively supporting them, four machine-guns of the 2nd Company with each attacking battalion. The Stokes mortars would be left behind owing to the difficulty of carrying ammunition. At 7.20 on the 9th the battalions were told to march in small parties to the area south-west of Harbonnières.

Infantry of the 1st Division moving up in the advance near Harbonnieres, just after a Whippet tank . . . from AWM HERE

The 7th Battalion continued fighting during the afternoon of the 9th towards Lihons with support from 5th Battalion.

On the morning of the 10th, 5th Battalion would press the attack along the road from Harbonnières to Lihons. With poor coordination between the Battalions and a lack of tanks, the 5th came under heavy machine gun fire and suffered severe casualties.

George Stafford was killed during this attack . . . He was only 18years and 7months old . . . his death was reported thus:

The map reference quoted is here:

Despite this knowledge George’s grave was lost and his body never recovered. Consequently he is remembered on the memorial at Villers- Bretonneux

Albert Francis would survive the war and return to Melbourne in 1919. He married in 1920 and died in Hawthorn in 1978.

After John Stafford’s death in 1914, Mary married Ted Ingles and remained in Oakleigh until her death in 1954.